At Los Olivos Mexican Patio, springtime is usually the busiest time of the year.

“But with the cancellation of Spring Training, concerts and the art festival, my numbers are down,” said Los Olivos owner Ruby Corral-Peck. “We have had cancellations and no-shows.”

At Dilla Libre in southern Scottsdale, owner Mike Baum said he went from peak sales to a screeching halt in four days.

All Dilla Libre’s food truck and catering events have been canceled for the foreseeable future.

Restaurants in Scottsdale and Valleywide are reeling from the effects of COVID-19 and many are calling on the public to help support them.

“It’s been quite devastating, to be candid,” Steve Chucri, president and CEO of the Arizona Restaurant Association said.

“We certainly have restaurants down 40 and 50 percent – and it’s climbing with the announcement yesterday from the City of Phoenix they are asking restaurants to close their dining rooms to resort to take-out only,” Chucri added. “It’s devastating to a restaurant.”

Following recommended limits on gatherings of more than 10 people, restaurants in Scottsdale and beyond have had to pivot to takeout, curbside and delivery while others have temporarily ceased operations.

Spellbound Entertainment Group also temporarily closed all of its bar and lounge properties through March 31, including Flint by Baltaire, Upstairs at Flint, Clubhouse at Maya, The District, Dakota, SHADE at W Scottsdale and The Living Room at W Scottsdale.

Because Scottsdale initially chose not to ban restaurant dine-in, some Scottsdale-area restaurants – including Los Olivos, AZ/88, Ramen Hood and others – continued to invite dine-in guests.

But they were forced to close anyway by Thursday after Gov. Doug Ducey ordered all Maricopa County restaurants to provide only delivery and takeout services.

Prior to that order, City of Scottsdale spokesman Kelly Corsette said, “While they recommend restaurants close dine-in options, they have not yet determined a mandatory closure is necessary.

But Corsette anticipated the possibility of a state-mandated closure of in-house dining, stressing, "if state and county health authorities decide restaurant dining rooms and bars must be closed, we would support it.”

The Coach House was one of those restaurants that had hoped to stay open for dine-in.

“The Coach House is a Scottsdale institution. We are a family-owned business who supports and loves the Scottsdale community,” said Drew Hassler, general manager of the Coach House. “We have remained open in other times of adversity and will continue to do so.”

He could not be reached for comment after the governor issued his order.

With one-third of Americans stating they plan to dine at restaurants less frequently, according to restaurant industry research group Technomic, and with dine-in down as much as 75 percent, restaurants had to do more than adjust their hours and focus on takeout and delivery.

“We do not fire or layoff anyone, but … without the public support, many small businesses will go out of business and many people will lose their jobs,” Corral-Peck said.

In an effort to support local restaurants, the ARA launched AZ Takeout Weeks on March 18.

Chucri anticipates the 180 restaurants usually participating in AZ Restaurant Week in the spring will take part in AZ Takeout Weeks.

“We are seeing restaurants become even more entrepreneurial to make sure they are offering these various options. So, our response is encouraging people to take out and encouraging curbside,” Chucri said.

Last year, restaurants in Arizona sold $13.4 billion worth of food and had a payroll of almost $13 million a day, according to Chucri.

“Those are big numbers and it is a big hit to our economy,” he said. “Of course, we all need to practice safety and good hygiene during these times, but it also can include picking up food from your favorite restaurant.”

For Dilla Libre, to-go orders make up about 20 percent of their business. On March 15, this number increased to 50 percent.

“We need all of the support,” Baum said. “The restaurants in Scottsdale and Phoenix need the support of our community and our state, local, and Federal governments. Without this support, many of your favorite local restaurants will be forced to close.”

“Hospitality workers will not have a safety net,” Baum added. “We cannot work from home. We will lose our homes.”

Another way to support local, Corral-Peck said, is to purchase gift cards and use them “when the coronavirus is a thing of the past.”

Restaurants such as Original ChopShop are even offering discounts on delivery and pick-up orders.

ChopShop’s include unlimited free delivery on orders of at least $20 placed directly from their website using the code “chopcares” and $5 off pick-up orders of $20 or more placed online or over the phone using the code “distancing.”

“If you are in a position and wish to support us, please order directly from us, instead of third-party delivery platforms,” they posted on Facebook. “The next several weeks are going to be really hard for small businesses like ours.”

Uber Eats waived delivery fees for all independent restaurants in the U.S. and Canada. According to Uber Eats’ statement, the app boasts more than 100,000 local restaurants.

“There are still possibilities [restaurants] could still stay in business because you still can do drive-thru, you can do pick-up,” added state Health Director Dr. Cara Christ said. “There are ways to social distance without shutting down the restaurants.”

Prep & Pastry at the Scottsdale Waterfront tweaked its menu to include take-and-bake pasta serving two to eight and other special takeout dishes feeding two to four, including Shepard’s pie and meatloaf.

Currently, no evidence exists of food being associated with COVID-19 transmission, according to both the Centers for Disease Control and Prevention (CDC) and the Food and Drug Administration (FDA).

The risks are largely associated with interacting with other people.

“Don’t simply think grocery stores are the only option today,” Chucri said. “Takeout from a restaurant is still very safe. When you look at the hygiene and the standards we are held to as an industry well before the coronavirus, we are one of the safest industries in business today when it comes to protecting the food quality we give our patrons.

“We are going to continue to do this even more so by an increasing wiping down handles and the like on a more regular basis than we already do.”

The James Beard Foundation also suggests stocking your fridge and pantry with supplies from small businesses or restaurant-markets, in addition to grocery stores.

Businesses are also supporting one another, according to Scottsdale Area Chamber of Commerce President and CEO Mark Stanton.

“We’re getting a lot of our members asking how they can help,” Stanton said.

“If you like a restaurant, buy a gift card, get take-out, or go and eat there. If you are a politician or lawmaker, save the people feeding America. Save the purveyors of culture. We sacrifice a lot to serve the masses. We serve you. Now, we ask for your support,” Baum urged. 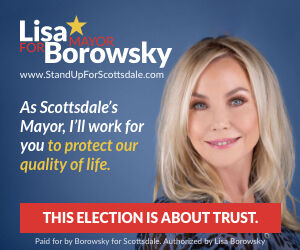 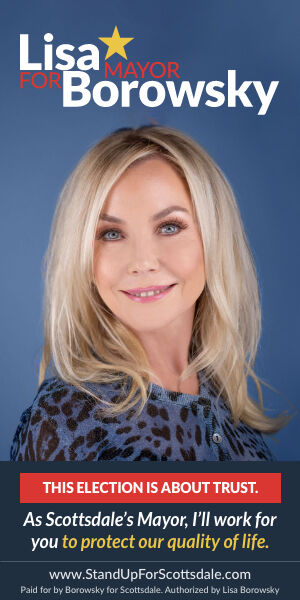